Tragically  a local sixth grade student was struck and killed by a pickup truck Friday, April 20, 2018.

The incident occurred during a school sanctioned “walk out”.  The walk out was scheduled as a protest against gun violence on the 19th anniversary of the Columbine school shootings.

According to the school district superintendent:

“This was an isolated group of students who breached the school’s perimeter,” De La Torre said, “We believe this was a group of about 12 to 15 students.”
He also indicated that  the school had about 10 individuals keeping an eye on students participating in a walkout to protest recent school shootings according to a KFOX14 news report.
The students reportedly wanted to go to a park and they had to cross loop 375 to get there.  Here is a picture from google maps: 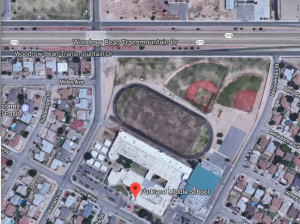 We all know that people do dumb things.  What responsibility do the school administrators have here?  Are the other students culpable?
We deserve better
Brutus

This entry was posted on Sunday, April 22nd, 2018 at 7:25 AM and is filed under Uncategorized. You can follow any responses to this entry through the RSS 2.0 feed. You can leave a response, or trackback from your own site.

26 Responses to A developing story