According to this slide from the recent special presentation to city council the new feral tax law will limit the city’s ability to issue tax refunding bonds: 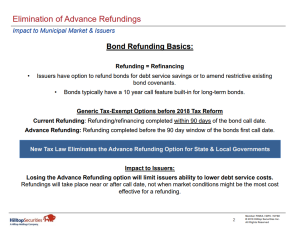 In prior years the city had the ability to issue tax refunding bonds to purchase old bonds that had unfavorable interest rates.  In short, when the cost of bonds went down the city could buy new bonds and use the money to refund old bonds thus lowering the annual interest costs.

Unfortunately the city often used the opportunity to make the new bonds expire later than the existing bonds.  They were kicking the can down the road so that they did not have to pay off the principal on the original bonds.

Before the new law the city could evidently use this trick whenever they felt that interest rates justified the action.

Evidently under the new law they will only be able to do this within a window 90 days before the published call date for the original bonds.  According to the chart above the call date on bonds is typically 10 years after the bonds were issued.

Bond interest costs fluctuate.  The city will now only be able to use refunding bonds 9 3/4 years after the bonds are issued.  Interest rates might be higher or lower at that time.

This will have a significant impact on the city budget.

The spendthrifts on this and prior councils have put us in a box.

This entry was posted on Wednesday, January 10th, 2018 at 5:00 AM and is filed under City government, Federal Government. You can follow any responses to this entry through the RSS 2.0 feed. You can leave a response, or trackback from your own site.