EPISD at it again

This would be hard to make up but unfortunately it is true.

The folks at EPISD either forgot about a school or they want to slip one into the bond issue.

The bond issue as passed allowed them to either build a new school to replace Basset middle or spend money to renovate it.

They have chosen to build a new school up the road on military property.

According to this slide here was the deal: 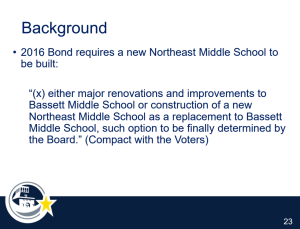 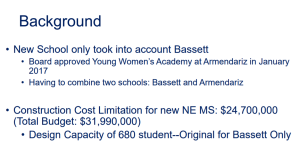 It would appear that they are planning to use half of their construction contingency budget to make the changes. 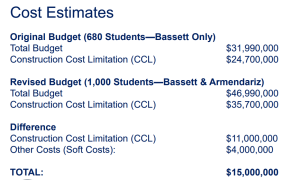 The extra bill is projected to come to $15 million.

“Compact with the voters” my foot.

This entry was posted on Wednesday, August 8th, 2018 at 5:00 AM and is filed under El Paso Independent School District. You can follow any responses to this entry through the RSS 2.0 feed. You can leave a response, or trackback from your own site.

14 Responses to EPISD at it again