Looking further into the issue of what they are now calling the “Mexican American Cultural Center” we had to go back to the August 14, 2012 city council meeting documents and video.

Attached to agenda item 13A (which proposed the ordinance ordering the bond election) we see this in the backup material: 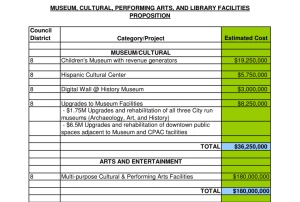 The language that council voted to place on the ballot turned out to be:

They were talking about a “Hispanic Cultural Center” but told the voters that they would build a “Cultural Heritage Center”.

Yes, it is now a “Mexican American Cultural Center”.

According to the U. S. Census Bureau web page  “OMB defines “Hispanic or Latino” as a person of Cuban, Mexican, Puerto Rican, South or Central American, or other Spanish culture or origin regardless of race.”

Back in 2012 city council was not honest with the voters.  City council is not being honest today either.

This entry was posted on Saturday, October 13th, 2018 at 5:00 AM and is filed under City government, Federal Government. You can follow any responses to this entry through the RSS 2.0 feed. You can leave a response, or trackback from your own site.

5 Responses to Just pass it–we can change it later