How to educate our mayor

The Texas comptroller has this graphic on his web site: 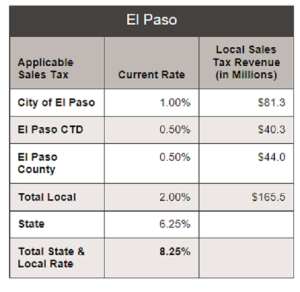 Contrary to what the mayor seems to be saying, the city is not giving any sales tax to the county.

More accurately, the voters of El Paso county decided to impose the tax on purchases.  The city had nothing to do with it.

The city has a legal department with enough lawyers to make it one of the largest law organizations in the city.  Maybe the mayor could get one of them to educate him.

This entry was posted on Friday, March 30th, 2018 at 5:00 AM and is filed under City government, County Government, State Government. You can follow any responses to this entry through the RSS 2.0 feed. You can leave a response, or trackback from your own site.

3 Responses to How to educate our mayor